STARTERINO electric start booster for Honda C70 6 Volt bikes.  Plug-in-and-ride solution installs with a bolt and 4 color-matched connectors.  Nothing to build and no modifications to the bike.  Installs with a 10mm wrench in a few minutes.  LED status lights for troubleshooting and verification it works.

Years in the making and testing, designed, assembled and tested by Jon Pardue in the USA for the 6 Volt C70 Honda Cub & Passport.  Other bikes and fitment, inquire.

Starterino is the result of Jon’s efforts to have his 6 Volt Honda C70 electric starter work like it should.  You know, press the starter button and it starts, only when in neutral.  Like Honda intended it to work.

After years of testing and development, Starterino is the end result that meets or exceeds every design specification: 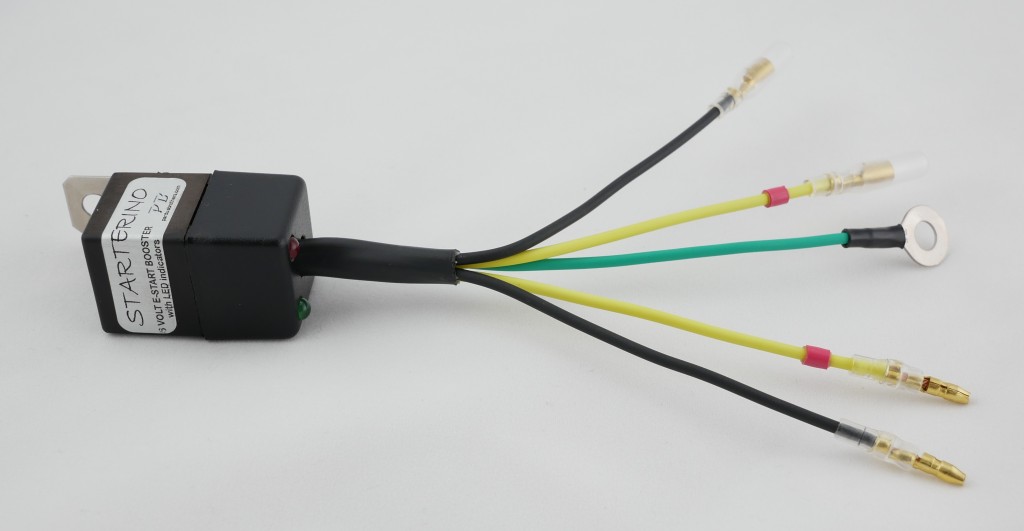 • Safety.  The starter should only work when the transmission is in neutral, the way Honda designed it.

• Automatic. The device must be transparent to use, requiring zero knowledge, no instructions or awareness.

• No modifications to the bike. It should be removeable without leaving any trace of being there.

• Built in LED diagnostics. Is the neutral/starter switch circuit viable? Is the starter solenoid coil OK?  Got enough battery power?

• Dependable.  To survive every kind of C70 ride and rider, make it tough and use excellent materials.

• Simple to install.  One bolt, plug in and ride.  Color matched wires and plugs shown in clear instructions.

• Help the bike endure.  The neutral and starter switches are badly overloaded by design.  Starterino eases the burden on the switches so they last longer and work properly.  Our LED neutral light helps even more.

How to know for sure a Starterino will cure your C70:

If your bike electric starts reliably now, and you wish to preserve the life of the neutral and starter switch contacts, Starterino is a nice upgrade.

NOTE!  If your bike will not pass both tests, it needs more than a Starterino!

Starterino includes an additonal double protection system for the C70 switches.  Starterino and the C70 starter solenoid have inductors inside.  Switching off power to an inductor generates a hefty  reverse Voltage spike as the magnetic field collapses.  Both inductive spikes are absorbed inside Starterino’s circuitry, instead of kicking back through the switches.

What is the problem with the C70 electric starter? Its an electrical design deficiency.  The neutral and starter switch contacts are tiny, maybe good for 1 Amp of current.   The neutral lamp uses most of that switch capacity.  The starter solenoid is a big load, drawing Amps of power to pull in with authority, and a couple of Amps during starting.  The tiny neutral switch contact is covered in motor oil, brushing against an oily moving transmission part to make contact.  This telegraphs a weak ground connection to the handlebar starter button switch.  Bottom line, the neutral switch circuit is not robust enough to power the starter solenoid.  This is why the neutral lamp goes dark when the starter button is pressed.

What do the Starterino LED lights indicate? 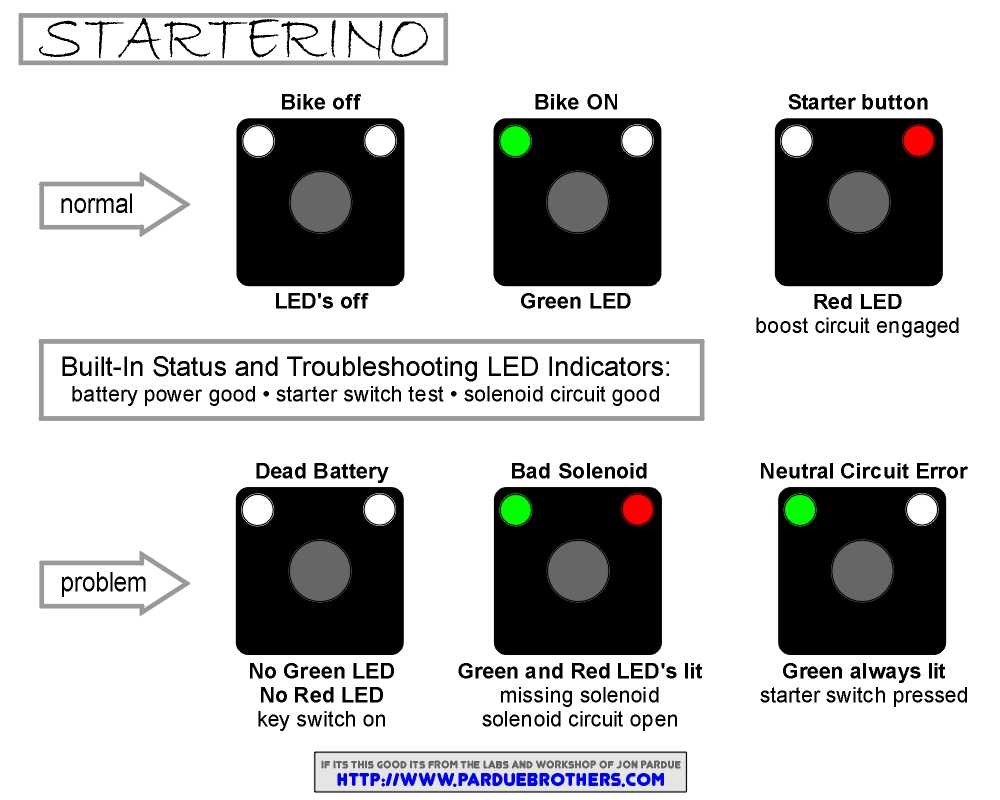 Got questions?  Hit us up using the contact form.